In additional to being a German road trip and a long needed vacation, I had great time boating in calm waters of German canals, seeing friends, doing my first hike in Bavarian alps and enjoying great vegetarian food and of course German beer! The early July was time well spent! 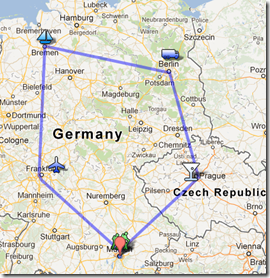 My Germany trip was always a mythical event, Axel had almost given up on my promises to come see him in Munich. But after my successful tryst with a German Visa I was upbeat to make the trip happen. Heidi decided to join in this trip, and we planned to visit her father who is boating in Germany on his four month Euro-boat trip. We found some pretty decent tickets to fly in to Frankfurt from Vancouver BC, thanks to AirTransat. So the trip was set in matter of couple of days, and the myth was about to be a legend (maybe that a bit too far fetched).

The Flag Adventures on Rusty!

We started the trip by driving from Seattle to Vancouver, BC parking our car at the airport and then taking a 10 hour flight to Frankfurt. We rented a car at Frankfurt airport to embark on our journey. Heidi was the designated driver given my love or actually lack of love for automobiles. Early in the trip Heidi was struggling with the underpowered Corsa, but soon she realized that she can get it to acceptable auto-bahn power my switching the A/C off. Henceforth in our trip the A/C was off (

) but hey now we could drive up to 160km/h! Anyways, we reach Bremen in decent time but in the maze of Bremen old town streets it took us about an hour to find the Marina and Rusty!

We spent the next day exploring Bremen and understanding the fancies of the Bremen town musicians who never actually lived in Bremen! In our over-doze of churches, castles and Rathauses (town halls) we encountered the very first set here! We made it up 200 stairs on top of the Church and enjoyed the spectacular view of Bremen!

After the easy day in Bremen we joined on the Boat tour. Over the next three days we covered about 200kms and made stop at two very German small towns before heading back on a 50minute train ride to Bremen. The very first day as I was on the deck driving the boat and asking questions to Jim. Over the first 10 minutes or so, I noticed all the boats around us has a German flag which didn’t quite look like ours, they had the colors in wrong order and the stripes where horizontal instead of vertical. I asked Jim about the flags, he explained that every boat flies the home country (in this case Canada) and visiting country’s (in this case Germany) flag in front and the boat’s country flag (in this case Netherlands) in the back; in our case we just happen to be flying the “nautical” version of German flag! We didn’t buy in to that and quickly use our cell-phone tourism techniques to look-up the German flag and research the “nautical” version; five minutes later we emerged with the knowledge that we were, in fact, flying the Belgian flag! Well that day, when we shored we actually scrambled to go find a German flag. In the frenzy of flag buying we ended up buying a very large German flag and a smaller one too. It was suggested that we come up with a tradition, rather new tradition. Whenever someone visits a friend in a different company they should bring a flag of the host’s country as a present! In that spirit we started the flag tradition and brought Axel the oversize and half-priced (go Eurocup!) German flag, it was promptly used as the tablecloth on our visit to world’s largest beer garden!

Fig 4. Flag Saga – the nautical version of German flag, the real German flag, and the new tradition of flag gifting – in that order!

The boat trip was calm and cheering. I’m envious of Jim for being able to do this for months, from Amsterdam to Paris and everywhere else in Europe is a perfect leisurely way of travelling and seeing the hidden towns in the exotic continent. We saw lots of things on the trip following is just a sample.

After the boat trip we go to Bremen back on the train and we started our drive eastwards – towards Berlin! We reached Berlin around 8pm and stayed at a very convenient location near the center of the city. Berlin was a last minute addition to our itinerary and was worth it! It has late hours and a very lively neighborhood – I’m actually tempted to work from this city, very convenient! We had dinner at an amazing vegetarian Vietnamese restaurant and tasted some amazing kiwi drinks, later we toured the happening areas and the next morning paid our visit to the Berlin wall and Checkpoint Charlie!

My favorite piece of Berlin which I brought with me was this Green guy on the traffic signs all over the city! It’s a very unique way to celebrate creativity with traffic light signs!

After the brief visit to Berlin, we started our onward journey to Prague! The drive was amazing, huge mountains and lovely rivers. We were greeted on our arrival in Czech republic with heavy showers, we purchased the road permit for the country and set our sights on Prague. We had a very convenient (thanks AirBnB) location in Prague as well, we stayed just at the out-skirts of old town! I never realized Prague is the Vegas for Europe; the city is full of tourists and people flying in for weekend trips! Over two days we did a lot of sight-seeing and has some really good Czech beer sitting in the town square and trying to unfold the mysteries of the ancient Astrological clock!

Nothing like spending time with an old friend – Munich rocks!

Onwards from Prague, our brave driver got clocked post 2000km and we made our way in to Munich! We celebrated our arrival was of course with true Bavarian tradition of Beer gardens, friends and 4am hookah (well I added that one

Fig 9 Munich! – our first day and Ritz’ last – Beer Garden at Chinese Tower, Another Beer Garden and then 4am Hookah bar.

It was Sunday and we were officially in our second weekend of the trip. Well like all true Munichers do, Axel decided to gave us the Improvised Tour of Munich. We walked through all the historic places of importance in Munich and learnt that Monks invented these un-comfortable shoes as a mark of their stoicism which later was adopted as a global high fashion women’s footwear! Strolling across the Munich parks, we also learnt that the there is big crisis in the population of Munich red squirrels, as they are being invaded and anti-darwinized by the big-fat grey squirrel. A series of scenes from our improvised Munich tour will soon make in to impromptu acts all over the world..

Thanks to Ashwin, we got a good map for doing a bicycle tour of Munich lakes. The next day, Monday, we decided to rent some bikes from Mike’s bicycles and visit as many Munich lakes as we could. In about six hours and 40kms of riding we made it through English gardens, four lakes, Olympia Garden, and a couple of beers!

A true tradition and the draw of beer garden’s for the Municher is the whole idea of bringing your dinner to the garden and supplementing if with a whole hearty beer! We indulged in this endeavor, and took our supermaket meal to the biggest beer garden in the world (Hirsch beer Garden).

On our last day, we decided to indulge in the Bavarian Alps! Munich has an amazing access to the outdoors, and no wonder that makes it the most sought after place to live in Germany! Thanks to Axel, we had co-ordinates for a hike in Wanks, rights on the border of Austria and Germany. We had some phenomenal views and a great 4 hour hike with about 2500ft elevation gain! We even got to enjoy a beer at the top!

Fig 13. Hike in the Bavarian Alps in Wank.

I wish the trip last longer! We safely made our way back from Munich to Frankfurt to Vancouver and then drove to Seattle. Over this driving and two border checkpoints, we carried some liquor and gifts for friends back in US. Watch-out Libar for some new concoctions inspired by the German-Czech trip!

From generic questions to interesting technologies and a very tasty set of food and drinks recipes, this trip had a ton of Trivia. I’m sharing some of my favorite tid-bits below!

Why I’m still a kid?

How is crystal made?
When was concrete invented?
How to read an astrological clock?
Does drinking alcohol reduce your lifespan?
How old is beer?
How did pretzels get their shape?
Who invented refrigerator?
When was first freeway built?

I’m a geek, even though I prefer to call myself a nerd.

Over the course of 12 days I founds a lot of interesting technologies, following are few of those field tested smarts!

Now, what did I find to share with friends & family – you are right food & drinks concoctions!

Finally, a word to what made us very productive tourists – cell-phones! We activated our international data plans before we headed to Germany, from local tourist information to walking tours to actually find our way on the auto-bahn there was an app for everything! We think we are the new generation of empowered travellers – the cell-phone tourists!

PS: You can find the full resolution pictures of the trip on Google Picasa.

July 4th Weekend - Hanging out with my favorite gals :)