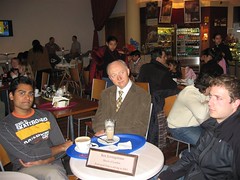 After the fabulous rest in India I had an hectic week in London! First couple of days i spent in oxford with Srikumar and next 3 days i spent in London with Axel, I met Tanushree for a brief moment as well!! [email protected] Oxford times reminded me of the 17th-19th century mighty and brainy Empire!! and the times in London where the 20th Century fun! I loved both!! London was a mix of the tourist sight-seer and the party animal!!

Friday we hit the bars as soon as Axel got to the hotel and we ended up disliking the fact the bar closed at 11pm!! and for a other one we had to walk few blocks with no success tho’.

Saturday we spent seeing the bukingham palace, london tower bridge, the russian new year celebration and yep! then we hit the party scene at Leicester square - damn it was cool!!!

Sunday was the day of Madame Tussauds!! We spend a tonne of time posing :). Well in this picutre you have to make out who is Mayor of London. Apparently Axel fooled a tonne of passer bys by posing as Mayor of London, it was hilarious!!! And in the evening we couldnt keep ourselves from hitting the Leicester scene one more time!! This time we were greeting with Live music, and you know what happened then! Well none of us got enough sleep before the flight next morning :).. hehe.. nothing more..;)/