On Sunday July 19, 2009 (update: silly date mistakes) around 9:00am, my team summited Mt. Rainier via the Emmons Glacier route. In my previous post I took a moment to describe and elaborate on the cause I would like to support as part of this climb. The full photo album of this trip is shared here. 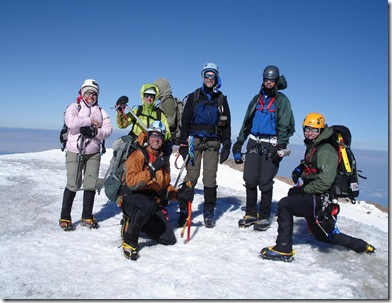 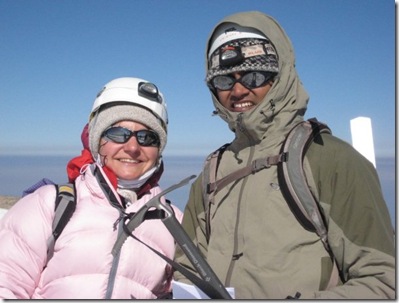 This climb was part of Olympia Mountaineers club climbs and was led by Colin. Originally we planned on having four rope teams but a few people cancelled on the climb last minute so we had three rope teams of three people each. I wasn’t signed up to be a rope lead but John and Bonnie were gracious enough to let me lead a rope. We planned to hike to the high camp on day 1, do a summit bid starting midnight and come back to high camp and rest for remaining of day 2 and then walk out to cars on day 3.

The Emmons route compared to the more popular DC route is a little longer and little more technical. I have done the DC route before and I felt that Emmons route showed a little more of the true mountain – lots of crevasses and wind!

We started at about 10am from the White river parking lot which is about 4500ft to get to our high camp (Camp Schurman) at about 9500 ft.

I got to lead a rope on this climb, I have been mountaineering for only a few years now and this was my first glacier rope lead. Here is an interesting picture on the first day as we were heading to the Camp Schurman high camp, seems like I’m leading my team to a crevasse – but hey there was a snow bridge there. 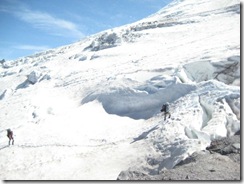 We got to Camp Schurman at about 4:00pm and were told by the ranger that no camping spots are available on the rock. For next couple of hours we were digging snow platforms, and finally had our tents set up around 6:30pm. 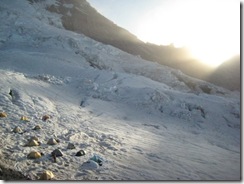 We woke up around midnight to start our climb up on Emmons Glacier. By the time we started (around 1am) there were already a quite a few partied ahead of us. I glitter of head lamps covered the mountain. 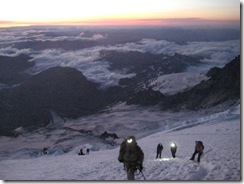 We had been informed by the ranger that the route was pretty straight forward expect for one tricky section which has a crevasse on side and a drop off on the other. Here is a picture of that section, while I was coming down it. 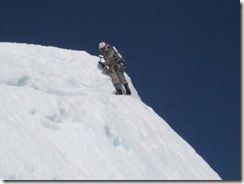 At this section – which was about at 11,800ft we spent about an hour and half waiting for other teams to pass, as most of them were putting an anchor before crossing. We were quite a bit concerned because with this lag we were running a quite a bit late, as it was already 5am! and we had about 2500+ ft to go and less than 5 hour before we absolutely need to turn back.

Fortunately, after crossing on top of this serac our three rope teams (Colin’s, Josh’s and Mine) moved reasonably fast and we were at the summit about 9:15 pm. Here is picture of our climb leader Colin leading - 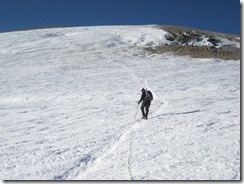 It was very windy on the summit. We paid our homage and dedications quickly and started on the way down at about 10am. 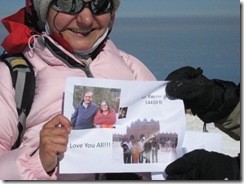 As they say the trip up is the easy part and other half on way down causes most mountaineering accidents! Well we did fairly well on the way down, we got to our high camp at about 2pm! However Mr. V, was a little slower and punched through a crevasse. It was only to be realized later than this punching through Crevasse will cause we some ankle trouble and an ER visit!

After getting to the camp we decided to take a quick nap and food break, pack out tent and be walking down by 4pm. This was slight change in the plan because the original climb plan was to stay as high camp on day 2 and then get back on cars on the next day. However the day 1 night was so windy and stormy at the high camp that no one could sleep. In fact, we were grateful than our 3-season vestibule less tent held in that kind of wind! So in the pursuit of some sleep we left the camp on day 2 itself!

The rest of the way down, as actually eventful! Mr. V successfully managed to get his a slight cut in chin while glissading the inter-glaciers. However, skipping the uncomfortable cut the glissade were fun!!! 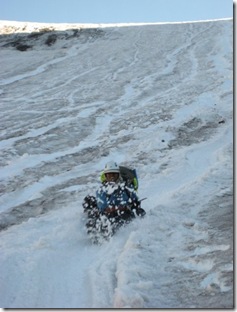 So by the time we got to the Glacier basin and started hiking out on the trail, my injured ankle had surfaced itself and grown in to an unbearable pain! With a 60lb pack it was increasingly becoming uncomfortable to walk out. I let Colin (our climb leader) know that and subsequently graciously Bonnie and John stayed with myself and Maris to only re-surface at the trail head in 4 hours, around 9pm! Thanks to Maris for carrying our tent for the test of way and thanks to Colin, John, and Bonnie for keeping us company! We did enjoy the awesome meadows and the views though! 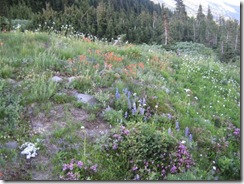 When we re-grouped around 9pm at the parking lot we decided to go for a late dinner in Enumclaw! We feasted in Mazatlan Mexican restaurant and every sip of my Dos Equi helped me relieve the ankle pain. After getting to Capitol hill, I made a late night ER visit and had my ankle checked and chin sealed.

The good news is that nothing is broken (as yet) but there is quite a bit of swelling hiding any other issues. Now the bad news - I don’t know if I will be able to go on our planned Seattle to San Francisco bicycling tour starting this Saturday :(.

Thanks to Colin, John, Bonnie, Josh, Ted, Chris, Andrew for letting me be part of this climb and thanks to lovely Ms. Maris was getting me on this climb! Colin did a great job leading the climb, it was my pleasure to be in such an awesome company!