Every year I try to keep some focus on fasting, meditation, spiritual pursuits and reflection during the week of Jain Paryushan. This year is no different – I’m making sometime to learn more about Jainism, other spiritualties and reflect. My goal is to complete reading the book “Goodness without God” this week, more on it later. In this post I wanted to focus on Sramanas, and their effect on world spirituality as early as 6 B.C.

> > The Pāli _samaṇa_ and the [Sanskrit](http://en.wikipedia.org/wiki/Sanskrit) _Śramaṇa_ refer to renunciate ascetic traditions from the middle of the 1st millennium BCE.[[4]](http://en.wikipedia.org/wiki/Shramana#cite_note-Lochtefeld-5) They were individual, experiential and free-form traditions, independent of society; and in religious competition with Brahmin priests, who as opposed to Śramaṇas, stressed mastery of texts and performing rituals. > >

Growing up I heard the word Sramana quiet a bit and it is mentioned fair times in the Jain religious scriptures I have by heart. Only this week I’m getting to learn more about the broader context of the movement and associated thoughts. The Shramanas were the free thinkers and spiritual hackers of their time. They gave up the worldly life and the existing Vedic traditions to explore and discover new ways. Since they didn’t believe in authority of Vedas they would be termed as Nastiks.

Among the multitude of Sramana movements a few created their own thought stream and philosophical or religious schools. The Carvakas believed in perception, and to an extent established one of the earliest hedonistic school of thought – in ones life equation net pleasure should be more than net pain. They did not believe in cycle of life and birth. On the other hand the Jains stressed on non-violence (Ahimsa) **believed in karma, cycle of life and birth. Whereas the **Buddhists thought stream believed in a middle ground. A notable fact in all of these philosophical and religious viewpoints is that they were the rebels or reforms in Vedic thought process (or the mainstream if you will), trying to simplify and make spirituality relevant from the technicalities of time. They were spiritual hackers!

So why did I pick to read “Good without God”? I think the Sramanas very much like the modern days atheists or agnostics did not believe in one almighty powerful force controlling the fate of each individual and the premise of “Good without God” seems to imply that. I’m looking forward to reading and learning more.. 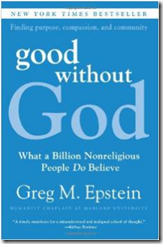