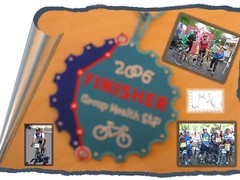 Myself, Leonard and Murari set to do the 206.2 miles STP in a day this year. We were doing pretty ok but lost a bunch of time owing to late start, broken seat replacement and slowing a little after midpoint. The accumulation put us to finish the ride probably an hour or so after sunset. We didnt want to be un-safe so made a decision to stop at 155th mile with about two hours of sunset left. Myself and Murari came back to start at the same point and finished the ride in about another 3 and half hours, Leonard had a commitment on sunday so couldnt come back to finish it. I was glad to join Raji, Sudarshan and Vijay at the finish line on Sunday. It was fun ride both days with weather being audaciously generous!

There were some tough decision we made on our day of ride. We wanted to be safe more than anything but on hindsight it seems that if we would have kept going we could have definately made it. When i went to portland to pick our bags up, I saw people finishing the ride until 11:00pm and many of those who finished at 10:30pm we had left behind. But sure having a better speed would have give us more confidence to go for it.!! My climbing mentor Ed would have so called this as the “Sahalee Clusterfuck”, two times in a row they were so close to peak of sahalee but couldnt do it for some reason or other, but hey alteast we did it!!!

Check out the more pics at: http://www.flickr.com/groups/wheelsofchange2006/

Bicycle touring with me !